This brief history of the Crane Duet has been pieced together from a variety of sources, given at the end of the page. If anybody has any more information which could be added, please let me know.

The story of what was to become the Crane Duet began in 1896, when John Butterworth was granted a patent, number 21,730, for “Improvements in English Concertinas”. (1)

Butterworth’s address is in Macclesfield, and he describes himself as a Pianoforte Tuner, although he also appears to have been a silk weaver - see here for Andrew McKay's excellent family history research into John Butterworth.

The patent describes the curved layout of the buttons in five columns, and the relationship between the buttons.

Having invented the new layout, it would appear that Butterworth passed the idea over to Crane and Sons, a musical instrument retailer based in Liverpool, but with branches throughout the UK.. It is assumed that Butterworth was paid for his invention, but as far as I can tell, there is no evidence. It has been suggested that, as Cranes had branches in Liverpool and Manchester, Butterworth, in Macclesfield, may already have been employed by Cranes. (2)

From here, it appears that Crane asked Lachenal & Co to make the first instruments. Early instruments are badged as “Crane & Sons, Patent-Concertina, London & Liverpool”. Lachenal seem to have used a new range of serial numbers, distinct from those used for their Maccann duets, although later on these two series may have been merged into one. This makes it difficult to estimate the number of Crane Duets made by them. Lachenal serial numbers ranging from 256 to 5960 have been reported (7). In addition, some early instruments have what could be a separate Crane serial number. It is hoped that responses to this website from Crane owners might help to clear up this mystery.

Another early manufacturer of Cranes was Crabb. According to Geoff Crabb, they were making them as early as 1900, but only as individual orders, and, he assumes, not enough to concern the patent holders. Their instruments featured buttons which were closer together than the Lachenal design, and arranged in a chevron rather than a curve. Variations up to 80 buttons were produced. (2) 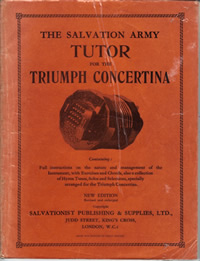 Around 1912, the Crane Duet was adopted by the Salvation Army as an instrument, renaming it “The Triumph” for their concertina bands. Lachenal continued to make them, badging them with their own name. The hand straps often have “The Triumph, The Salvation Army” on them. Over the years, Salvation Army bands also used English & Anglo system instruments, and often mixed them within the same band. An account of the Plymouth Band as recently as 1986/87, shows them playing 4 Crane, 3 English, and one Maccann. (4) [Click on the image on the left for an enlarged version of the front cover of the Salvation Army Tutor. Also, see the Links page for a copy of the full publication]

Around 1913, Wheatstone began making Crane system instruments. A lot of the Wheatstone ledgers are still available, which makes research into their instruments easier, although interpreting the various codes and model types can be difficult at times. Once again, it is hoped that if enough owners respond to this website by offering information on their instruments, we may be able to make sense of it all, but their ledgers suggest that they made around 400 Cranes between 1913 and 1973 (8). Wheatstone eventually took over the Lachenal business in the 1930s. Lists and catalogues from the 1950s show five models, with retail prices ranging from £36 to £95 (5).

After the end of Lachenal’s business, the Salvation Army “Triumph” instruments were made by both Wheatstone and Crabb, although by this time demand for new instruments was low. (6)

Some Crane duets made by Jones are also known to exist, and examples made by Shakespeare/Mozart have also been spotted.(9)

How many were made in total? How many still exist? These are two questions to which we will probably never have a reliable answer. But it is hoped that with some help from the many Crane owners around the world, we might get somewhere close to the truth, and make it easier for future owners to research the history of this instrument.